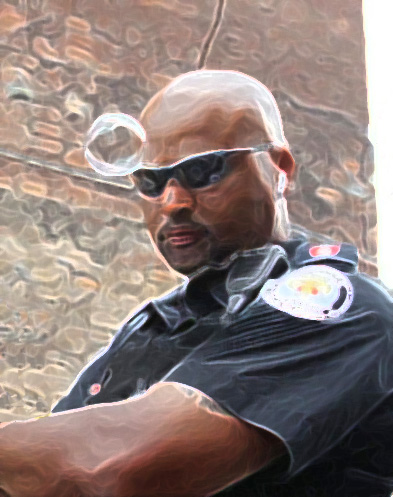 Creative introspection causes me to realize I should – from time to time – pick up at least one of the many gauntlets thrown down by abusive authority, as demonstrated by officer Bubbles and others of the Metropolitan Toronto Police during the G20 summit.

I’m not naive enough to believe I will change anything, but a little push-back from the realm of free expression is a good thing; an artist’s obligation in fact.

Don’t rational citizens have a duty to question police actions against otherwise obedient citizens? The absolutely ridiculous containment of regular people by police who stripped off their own identity tags while deriding citizens detained in  makeshift holding pens can only be described as a grievous violation of human rights.

All of this encouraged and condoned by our own government.

This is my country, not some playground for police practice.

Shouldn’t artists use their talents to rail against abusive policing, against the diminutization of regular citizens to a crowd of lawbreakers and against unlawful detention coupled with the denial of basic rights?

Should we accept agent provocateurs posing as protesters breaking windows and inciting violence? Why should we turn a blind eye? Where is the justification?

There exists the implanted message within our psyche that authority looms over our heads like the sword of Damocles and if directly challenged, unpleasant consequences may result either behind the locked door of an interrogation cell or in the courts. You might even lose your life while in police custody, examples of this abound.

In my opinion the problem with policing stems from weaknesses found in human nature. Rarely can someone rise above their prejudices and function in a fair and honest way when asserting authority. The police officer who can detach their ego from the execution of their duties is a rare bird indeed. Too bad this isn’t the case with officer Bubbles and many others like him.

Look at the video below and tell me that this officer doesn’t suffer from some kind of instability. I would argue that his actions reflect a police culture sympathetic to and complicit in this kind of abusive authority.

With no remedy in sight, what can be done besides trying to shine a light on the dark side of policing?