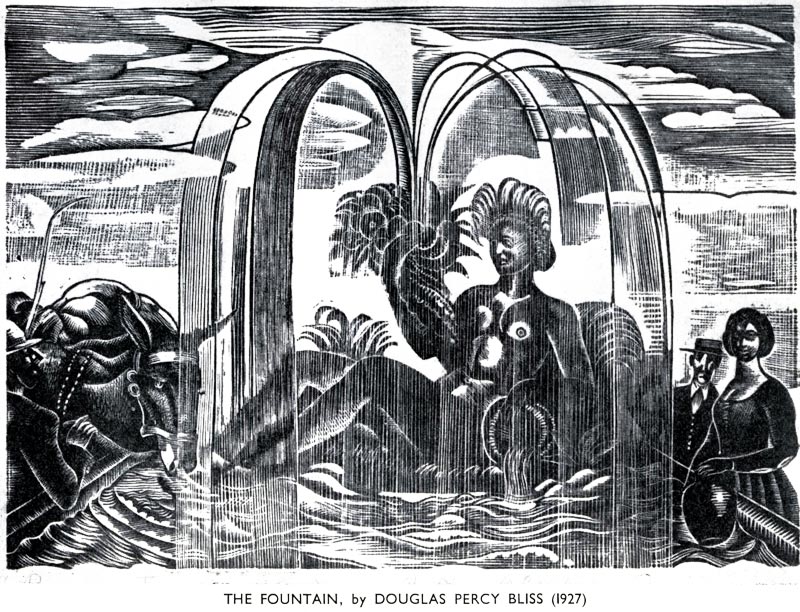 THE STUDENT’S BOOK OF

As Bewick had been the only engraver of note to use the white line method, the wood-engravers of the early nineteen-twenties had little in the way of tradition either to help or to hamper their experiments. Though they respected Bewick for discovering the true technique of the artist-engraver instead of following the methods of the commercial engraver, they looked upon him more as one who pointed out the way they should go than as one who should be followed. Terrified of the grey monotony of so many of the reproductive engravings of the previous century, they often flew to the other extreme, especially those working in France and Germany, and produced prints which may have been strong but were frequently quite as crude and naive as any of the  “slovenly stamps” which roused the contempt of Horace Walpole.

To a certain extent this was inevitable, as most of the engravers were as yet inexperienced and unskilled, with certain notable exceptions like Eric Gill, Noel Rooke, and Robert Gibbings. They, however, worked primarily for books, and realized that where an engraving has to be used along with type to decorate a page the form of the book must obviously be considered. Too much black may upset the page and also will cause the printer endless trouble, as unless he resorts to heavy inking the blacks will print grey, and still more ink would clog the finer cutting.

It must be remembered, however, that most of the prints produced then were intended as “wall” or “folio” prints and not for books, and consequently the engravers could give full play to both their fancies and their experiments. Although many of these prints looked more like lino-cuts than engravings, a great many had a strong decorative quality and made very pleasing patterns of black and white.

In the last dozen years or so others joined these pioneers and, as the “revivalists” attained more and more mastery over the medium, the technical standard rose enormously. Examining the present work of Blair Hughes-Stanton, Agnes Miller Parker, Gertrude Hermes, John Farleigh, Clare Leighton, and Douglas Percy Bliss, to mention only a few of the brilliant wood-engravers who form the Society of Wood-Engravers, we find that the engravings of to-day are every bit as interesting in design 35 and express quite as truly aesthetic emotional experiences as those earlier prints, but have in addition infinitely greater richness of colour and texture, due to finer and more varied cutting. The prints of these artists are all strongly individual and are in no way derivative.

Examining the actual cutting of these engravings one finds that in each case the choice of the particular tool used has been governed by three factors-the mark made by the tool, the object depicted, and the personal style and outlook of the artist. For every part of the design, whether a tree, a house, a figure, or what you will, the necessary symbol has to be invented to express each of these three factors. If one conforms to this and can attain a reasonable amount of control over the tools, one’s style and technique will be good no matter how simple or how complicated the design may be.

Free shipping on all artwork! Dismiss