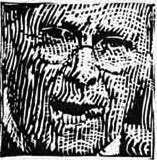 Here is another central character in the Axis of Weasels tragedy that continues to be played out in the world as a consequence of the botched Bush years. Rumsfeld’s dogmatism and disregard for the Geneva Convention and endorsement of torture made the Taliban look like choir boys.

Here’s the unforgettable quote uttered by Rumsfeld regarding the war on “terror”;

This dude is a major player in the ‘axis of weasels’ gang who helped perpetuate the chain of cause and effect that to this day, resonates badly for the entire world not just the Divided States of America. Can anyone say ISIS?