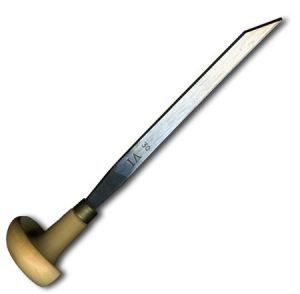 Seems a lot of folks are landing on this page looking for a multiple tool, like the kind you might wear on your belt, a Leatherman or some other such useful tool.

Here we are discussing a wood engraving item which is called a multiple tool because it can engrave two or more perfectly parallel lines at once.

The idea behind it is that it cuts two or more parallel lines at once, depending on the line count on the graver ( the one shown here cuts six lines at once). So  rather than using a tint tool to lay down lines side by side using your eyeball the multiple tool will give perfectly spaced cuts. 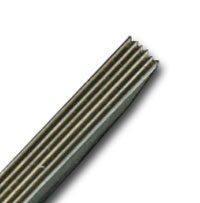 This is a magnified view of the underbelly and tip of the graver. Here we can count six points that will cut the lines as it is pushed across the woodblock surface.

A famous practitioner of this esoteric tool was Hans Mueller, an American illustrator from the 1930’s and 40’s. He published a beautiful book called Woodcuts & Wood Engravings ~ How I make Them. I remember my brother chiding me years ago because I found it hard to accept the $60 I had to pay to buy a used volume from an antiquarian. A laughable sum today.

Mueller often made engravings almost entirely with this tool using it to give form to elements in his design.

Pictured here is a detail of a wood engraving by him that was done almost entirely with a multipletool graver.

You can click on the image for an larger view.

He was also known for making three and four colour wood engravings using the pinhole registration technique. I’ll write an article about it at some point.

One thought on “Multiple Tool”