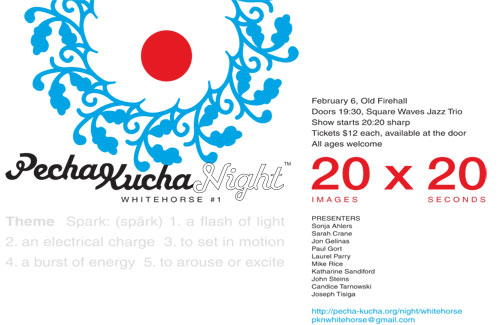 Okay, a year ago I didn’t know what Pecha Kucha meant. A Mayan ruin in the Yucatan perhaps, or another way to say hootchie kootchie?

Now that I’ve attended two and presented at one of them, I now know that it’s a very happening and groovy event involving ten presenters following a predetermined theme, each presenting a Power Point limited to 20 slides shown for 20 seconds each for a total of 6 minutes and 40 seconds.

In other words, say sayounara to those long self-absorbed slide shows where the presenter is so into himself that 15 minutes might pass before a new slide is projected. We’ve all been there and we all wanted to jump out the window to escape the stifle at one time or another. 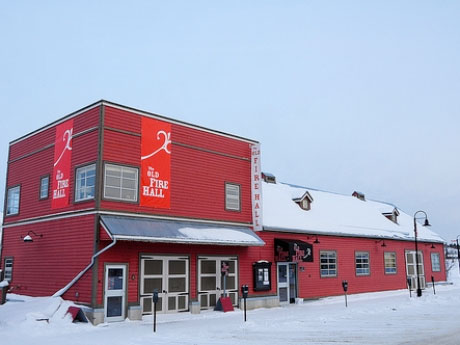 Conversely, say hello to an energetic room crowded with people, a jazz combo lifting the air and bar staff pouring cocktails, making for a very civilized atmosphere with a palpable excitement in the air.

I was really pleased to be a part of first Whitehorse Pecha Kucha on Feb. 6/2010. The theme suggested whatever inspired you or sparked one to act and do. The presenters did a fantastic job providing an introduction to the work of some that I was ignorant of. Namely, furniture builder/designer Paul Gort, his work is right up there with the best. Laurel Parry did a bittersweet story with a dash of wry wit about her father-in-law’s missing ashes and Mike Rice of Catalyst Communications presented some terrrific advertising humour. I dug them all and so did the audience. A big thanks and expression of gratitude goes out to the organizers Jen Edwards and Chera Hunchuk.

You know it’s a success when people are turned away at the door due to capacity, which I thought was most unfortunate. 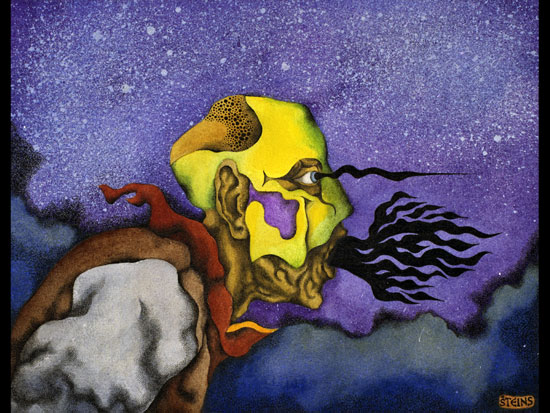 During my presentation I was able to introduce my dad, Ilgvars Steins to the Whitehorse cultural community. So, my 20 slides tried to convey an idea about him and his work. Judging by the positive feedback I guess it was a success. Shown above is one of his images called Fire Breather. 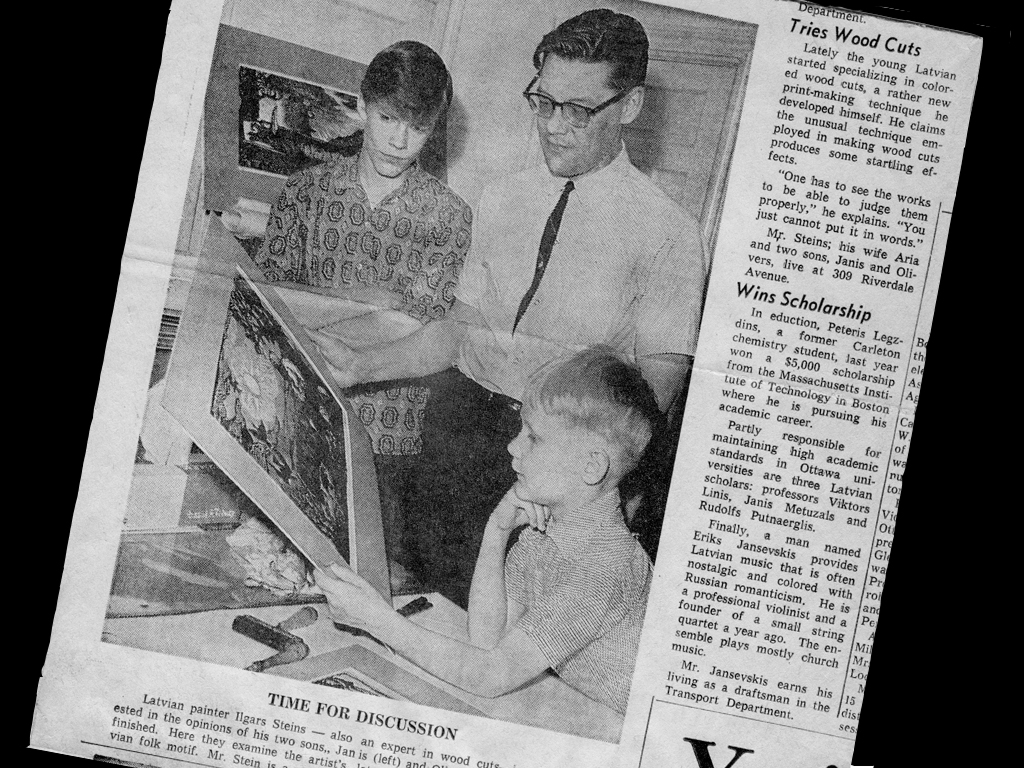 I tried to provide an overview of dad’s work within this ultra condensed format by trying to include what I thought best contributed to the story. Here’s an Ottawa Citizen article from the early sixties featuring dad as another “happy” immigrant success story flourishing in the land of “milk and honey”.  Journalistic standards seemed much lower then, the story is full of typos and misinformation. Never mind, it’s still a nice keepsake although dad got lots of good media coverage during his artistic life.

If you ever have a chance to take part in a Pecha Kucha Night don’t hesitate and be there at 20:20 sharp!

Here’s the official PK site if you are interested.