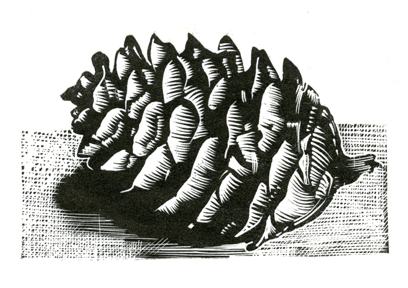 This wood engraving was to serve a dual purpose; to get back into making engravings and to create a Christmas card design.

Unfortunately, life got in the way and I didn’t get it done in time for mailing although the sketch was ready and waiting. I’ll try again next year.

Ultimately it was a joy to get the gravers out and get down to making another wood engraving, no matter how simple. Just the satisfaction of parting the wood fibres was enough. I used a large lozenge graver on the cone. 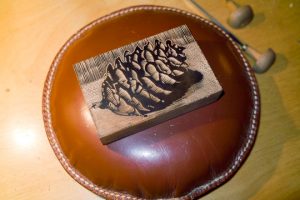 I’m very attracted to simple motifs like this spruce cone. To me it’s very haiku-like and contemplative.

Even so, I was faced with making some editorial decisions. The rule of thumb when making a relief print, whether it’s a wood block or a linocut is to take care not to cut away too much before having pulled a proof. It’s much easier to cut away a little more than it is to add material that has been wasted.

To that end I agonized over how much of the background to leave in the design. I toyed with the idea of suggesting the aurora borealis on the horizon but it seemed to take away from the cone. 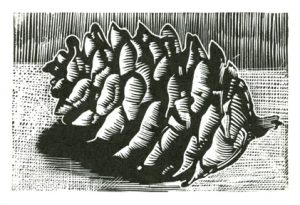 Here’s the first state of the print. It’s a tough call. Just the same I elected to remove the upper background and lower the horizon.

Ultimately, I could have removed everything allowing the the cone to float in space. One of my hangups is the need for borders or something that defines the space, so this is a partial departure in that sense. 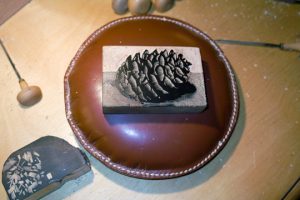 border-less space. I haven’t embraced that approach yet since I’m attached to well defined edges around the work.

On the left you can see the completed block after tediously chiseling away material around the upper section.

In any event, I’m quite excited and enthused about making some new wood engravings. Especially in light of the fact that any day now I will be taking possession of  my new letterpress. Very exciting.

5 thoughts on “A Practice Engraving”