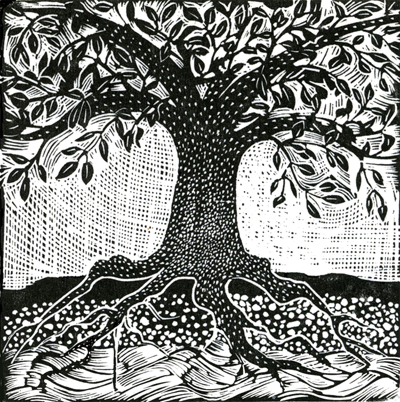 Here’s my wood engraving commissioned for a new publication by the Center for Action and Contemplation, an institute run by Fr. Richard Rohr, a highly regarded Franciscan Mystic in Albuquerque, NM. The journal is called Oneing in addition to another called Radical Grace for which an earlier engraving of mine was used.

The art director provided me with a theme according to what Fr. Rohr wanted to see as an illustration. The foliage represents  knowledge of the millennia with nourishment drawn up from the aquifer via the roots.

Resistance provided by deadlines is a great motivator for me. I had roughly seven days to finalize the sketch and translate it into an actual wood engraving. It measures roughly 4.25 x 4.25 inches on a boxwood block made by T.N. Lawrence & Son a long, long time ago.

7 thoughts on “A Commission”