POSSIBILITIES AND CONVENTIONS IN WOOD-ENGRAVING

In addition to the white line the necessity for compressing his tone scheme into a limited number of tones will emphasize the need for recognizing some definite convention. His problem then is how much he must conventionalize his forms and his tones in order that everything in the design may be consistent. The symbols used for the forms, his method of expressing these symbols, the tones which suggest colour and lights and every other aesthetic factor must be conventionalized to the same degree and must be the same distance removed from realism. Put into words all this sounds very alarming and difficult but by the time the artist has produced several engravings most of these problems will have solved themselves.

One of the first difficulties to present itself arises when one has two objects which are of the same tone and which are placed against each other. One can separate these by a line either black or white but often the result is more interesting if one separates the edges by lightening one and leaving the other dark. For example in Southern Landscape I have used this low relief convention contrasting the edge of one form with that of the next and stressing the effect of light in order to give as much colour as possible to the design. I have exaggerated this but in every form of art it is only by over statement that one can avoid under statement.

In nature where a dark meets a light the dark always appears darker and the light lighter at the point of contact and again the inside of a shadow will appear lighter than its edges owing to the reflected light and by forcing these edges one may add life to the design and give actuality to the forms. Where one has to fill a space in a decorative manner as one has to do in designing a wood engraving the low relief method is in many ways a more truly pictorial way of doing so than by endeavouring to model in the round. There are, however , no fixed rules of style in wood-engraving , and until the beginner has found his own way of expressing himself and has developed his own technique, this way may give him a method of attack.

So far I have dealt mostly with form , as in black-and-white work form is naturally the most important consideration, whether it is expressed three-dimensionally in light and shade or two-dimensionally in pattern. Colour and tone are, however, just as important in wood-engraving. By colour I do not mean coloured pigments or inks. Coloured woodengravings may be quite legit imate and may often be interesting, but to my mind they have none of the dignity and power of those printed in black ink. When the engraver speaks of the colour of his print he means the range of tones running from black and greys to white. By means of these one can suggest an extraordinary richness of colour and texture.

In suggesting the self-colour of objects one must make ones own conventions. I have seen prints in which the blue of the sky at noon was rendered as a dead black which was perfectly convincing. If the objects on the sky-line are very light , such as buildings in the full light of the sun I the sky will look dark, and a black tone would express it more truly than a white. But whether one’s tone scheme is governed by contrasts of light and shade or by the self-colours of the various objects in the design , the convention employed must be based on the artist ‘s experiments into the possibilities of the medium, and not on preconceived ideas and habits cultivated by working in other media. 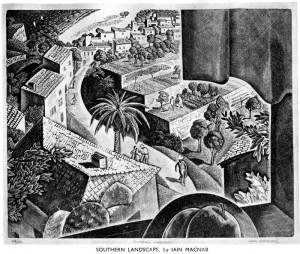