THE STUDENT’S BOOK OF

HOW TO HOLD THE GRAVER

The tools are usually made large enough for a large hand and are cut down for a smaller one, so that when choosing one’s tools it is as well to know how to hold them in order to find whether they should be shortened and, if so, how much. The tool is laid slanting across the palm,

The wrong way to hold the graver 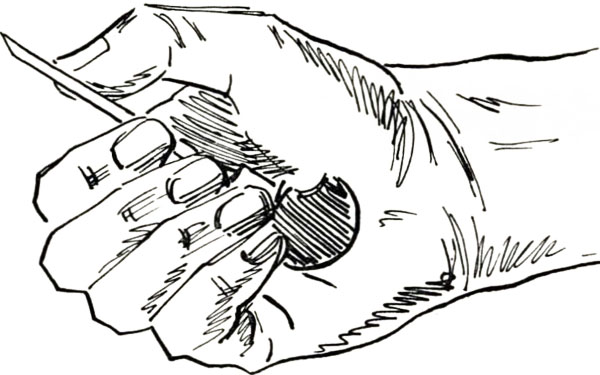 The right way to hold the graver.

the handle so that it may be pushed by the heel of the hand, with the tips of the fingers resting along the tool, so that the tool may be held almost parallel with the block and with the fingers clear of the surface .

The instinctive way of holding the tool, that is by grasping it between the thumb and forefinger with the other fingers bunched around the handle, may seem easier at first; but the hand will become cramped and one cannot engrave with any freedom, and with all but the smallest blocks the fingers are bound to catch on the edge of the block. Try putting the tool on the table and dropping the hand over it, then lifting it without curling any of the fingers round between the table and the tool. The tool should be held by the fingers with the thumb free either to rest on the block or to guide the tool. If one forces oneself to hold the tool properly from the beginning, one can then work on any size of block, and find freedom in handling any tool. After a certain amount of practice one should be able to engrave almost as easily as one can draw with pencil or pen.

HOW TO USE THE GRAVER

Having acquired a block and some tools, the beginner is eager to start engraving his design. I would, however, advise students not to embark on a picture immediately, but to use the first block in learning how to manipulate the tools. Few will follow this advice, but it will save a great deal of time and trouble. The usual practice is to make a few scratches on the back of the block and then, filled with enthusiasm and a sense of adventure, to start hacking at the surface and ruin it completely. It is pretty certain, anyway, that one is going to spoil the first block, so one might as well make up one’s mind to do so usefully.

One should remember that the charm of the process lies in the fineness and delicacy of the craftsmanship, and these can only be gained by an ability to control the tool so that it will respond to the artist’s intentions surely and without hesitation. Technical ability and the pride of the craftsman are perhaps more necessary in engraving than in any other medium; and they cannot be compensated for by any amount of exuberance or spontaneity. The wood block in itself is a beautiful thing, and to maltreat it with scratchy, ill-considered lines is quite criminal.

Start working with short lines, keeping them parallel. Next try to let them finish so that the ends fall along a straight line drawn on the block with a pencil. Do this with all the tools, and see that an even depth of line is maintained for each tool.

Never dig deeply into the wood: you are engraving, not gardening. Remember that the wider the angle between the tool and the block, the deeper will the point sink and the shorter will be the line. It is humanly impossible to drive the point of the tool very deeply into the hard wood in the effort to make the line longer; all that happens is that the point of the tool breaks off and time is lost in having it re-ground. The tool should be held so that the angle between it and the block is as small as possible, and the line should be capable of being continued indefinitely without the point going any deeper.

At first the tool is apt to cut a little and then suddenly slip and shoot along the surface. In order to avoid accidents, hold the block on the sandbag by means of the thumb and forefinger of the left hand , with the wrist resting on the table and the hand well below the level of the block, so that if the tool does slip it will go harmlessly over, and not through your finger. Sit squarely at the table and engrave parallel to your front. Avoid the action of pushing the tool away from you, for this cramps the action of the wrist. If the lines run away from you, turn the block, which will spin easily on the top of the sandbag. If no sandbag is available, some leather-covered book which is not too stiff and hard will do almost as well. I have heard of the family Bible being used with great success.

When a curved line is wanted the block should be swung round against the action of the tool. Do not turn the engraving hand, but hold it still, pressing steadily on the point of the tool, and the even turning of the block will give a perfect curve.

From the beginner’s point of view, the one alarming quality of wood is that mistakes cannot be erased. If a slight slip is made, very often a small alteration in the design will cover it up, but if the mistake is serious the only remedy is to cut the piece bodily out of the block and insert a fresh piece of wood.

Each engraving tool will make its own type of line or mark on the block , and the engraver must choose the particular tool which suits his purpose and will give him the particular kind of line he wishes to produce. He must never try to use the same tool for different thicknesses of line . If he takes a fine tool and, pressing it deeply into the wood, endeavours to make a wider line, he will only find that he has coarsened the line and made its edges appear ragged. Or again, if he tries to make very fine lines with, say, a broad spitsticker, the tool may make uneven lines and most probably will slip and scratch the surface of the block. As he varies the line so must he vary the tool.